What stops a protection challenger from getting into the top 5: the protection premiership? Elsewhere we look at how companies can enter a challenger cage, defeating themselves. But perhaps, instead, incumbents have established economic moats? This article examines three.

Part of a series on protection challengers: 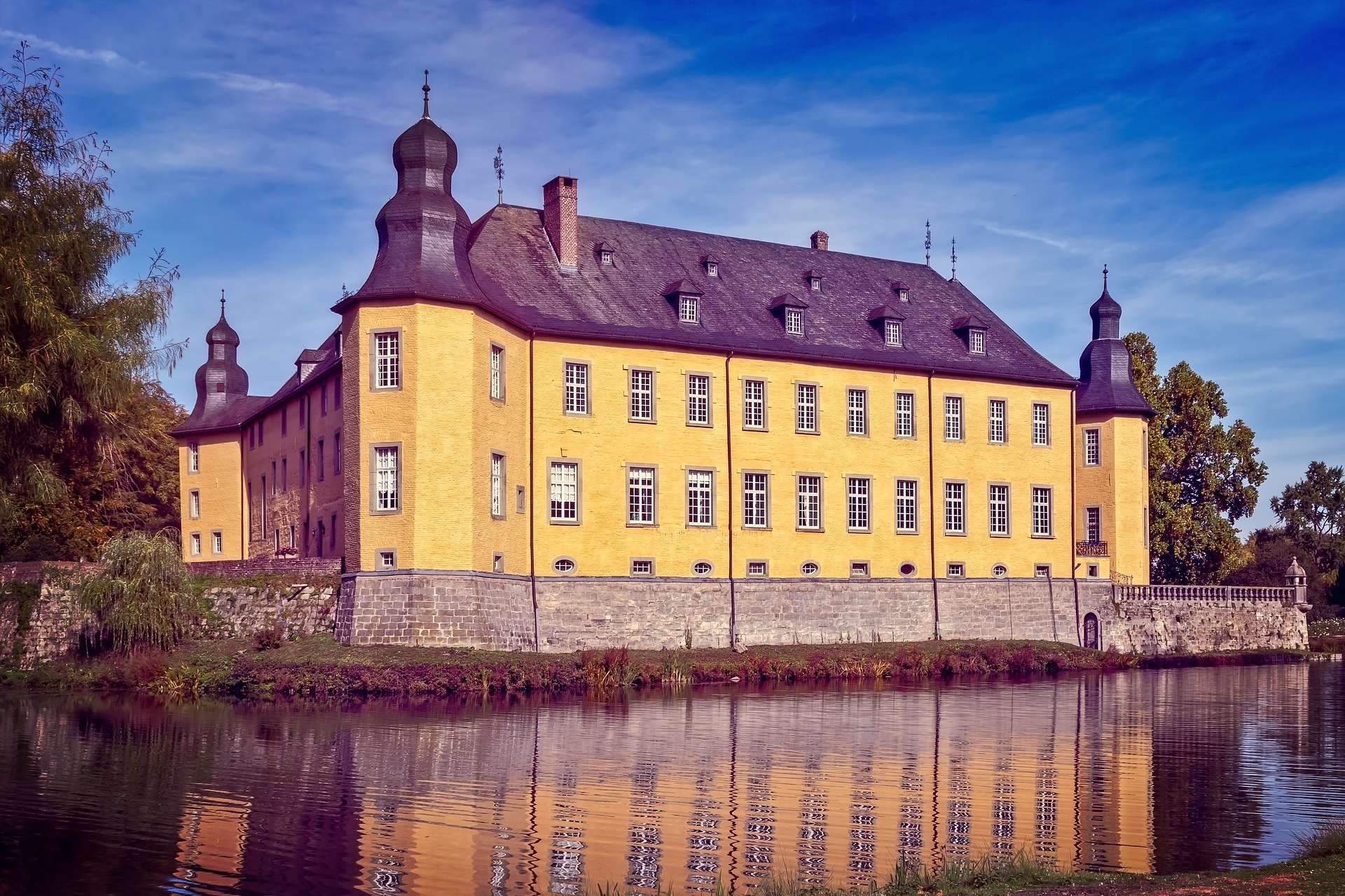 Most of the top players reinsure most of their business. Persuading reinsurers of your vision, credibility and ability to deliver is key to success, but to limit the article’s scope I’ll take this as a given. I’ll also assume you have or can rent an appropriate insurance licence.

The most obvious question is simply “have premiership insurers got a moat?” Given the two obvious gaps in the above table it makes sense to consider three potential moats:

[1] Is there a premiership moat?

The top 5 is unchanged since 2017. The order has changed a little, but L&G has always remained top; in 2020 L&G was also top for Income Protection (where LV= appears in 4th position and The Exeter in 5th) and stand alone CIC (where Vitality takes 5th).

That stability (and more) can be deduced from the following:

Eleven providers have been in the top 5 since 2000. Ignoring the current top 5:

Turning to the current top 5:

Just one challenger breaks through

Since ScotProv’s dramatic 1996 Self-Assurance launch - and ignoring acquisitions - at most one protection challenger has broken into the protection premiership. There’s a story in that.

Fortis Life launched in mid-2008, under the leadership of Martin Werth and with a Real Life Cover product co-designed with Lifesearch. Fortis was renamed Ageas in 2010.

By the end of 2011, three key staff (all ex-Munich Re actuaries!) including the founder had left, but the new team enjoyed further success, entering the top 5 in 2013. AIG bought Ageas Protect in 2015, dropping out of the premiership for two years, but re-entering in 2017.

So, is there a premiership moat?

Despite the stability since 2017, I think not.

Looking backwards, Zurich took 10 years to enter the premiership, eased in by the departure of a declining Scottish Widows. Ageas was quicker at 5 years. ScotProv and L&G were dynamos:

So, there have been different types of breakthrough.

Vitality must be closing in on Zurich, which is top 5 based on policies. The others have market shares of 5-6%, but LV= will be determined, given its recent ownership challenges and Widows recently reiterated its aim to be a top 3 protection player by 2025.

We have already seen that Zurich took 10 years to enter the premiership. Unlike some others, it has been unable to kick on. A big gap has emerged between 4th and 5th position:

I’ve no proof, but here’s my perspective on the gap.

I am confident that Zurich could close the gap if it really wanted to, and am just puzzled that it hasn’t. Resources? Priorities? I believe the 4th-5th gap will narrow in the coming years. My guess is that it will be closed by someone other than Zurich.

I conclude that there is no moat between 4th and 5th.

One reader, who had worked at L&G, commented:

I read they shook protection and agreed with your analysis. L&G’s strategy is easy to communicate and difficult to copy. L&G have been very good over the years at focusing on the essentials and not ducking difficult decisions.

Let’s unpick each of those four statements.

L&G’s strategy is easy to communicate

At one level, certainly:

Our purpose is to improve the lives of our customers, build a better society for the long term and create value for our shareholders. This inspires us to use our long-term assets in an economically and socially useful way to benefit everyone in our communities.

Source: L&G’s about us

But that doesn’t help if you’re trying to copy L&G’s success. Not surprisingly, L&G doesn’t publicize its protection strategy widely. But important elements can be deduced by observing its behaviour and talking to intermediaries.

Some areas of strategic intent and ambition are published - see the culture section below - and other items (e.g. on distributor quality management - DQM) become clear if you can read between the lines.

Originally price-focused, L&G now competes on less visible items, such as underwriting, mortality management and analytics. It can still price term and can apparently negotiate a mean reinsurance deal. Having mastered the essentials, it is now replicating these across adjacent markets.

L&G’s strategy is difficult to copy

A competitor or challenger must master the essentials - see the next section. In principle these can be copied but, for some, L&G will have a 20-year head start. Some won’t have the stomach.

With that head start L&G now has an ambition to kick on. It’s hard to copy culture.

L&G focus on the essentials

I’d strongly agree. Some insurers have built real capability over decades, particularly in the areas of analytics, underwriting and pricing - L&G more than any. But anyone else could have this focus.

The table below sets out what I deem to be essentials:

Having the right channel strategy helps you scale. Partnerships help, but it’s not just L&G that has them; Aviva got in early too and AIG has developed them. AIG sales in 2021 were £73m, 18% from partners (Direct Line, NFU Mutual, Neilson, Post Office, RBS and Yorkshire Building Society).

What did the reader had in mind? It could be selling their mature savings business in 2017, but I can think of three protection candidates:

DQM. This was started around 2003 and from the outset had a positive focus - note even the subtle change from “distributor” to “distribution”.

Our Distribution Quality Management programme helps you make improvements to your business through additional training, system and process changes, with hands-on support from our experts. Each of the programme’s strategies and tools has a dedicated purpose, with the common aim of improving business and customer outcomes.

But, where necessary, L&G will cull agents, terminating £20m of cumulative revenues by 2020.

L&G is positioning itself to have a fintech mindset. It appointed its first MD of Fintech in 2017, with that role now having passed to Wian Pieterse, who certainly has the protection experience.

Legal & General have been industry leaders in technology and innovation for protection for many years and we have the opportunity to bring together the many benefits and strategic advantages that Legal & General enjoys with the fast pace, technology first, customer centric features of successful digital start-ups to create fintech businesses with the aim of delivering exponential growth.

There is it again: an appetite for exponential growth. L&G has commercial interests in fintechs, including theidol.com, SalaryFinance and Smartr365.

Perhaps a little less visibly, but at least as ambitiously, L&G moved Stuart Welch their Commercial Director of UK Retail Protection to accelerate their US push. Applying UK insights, they aim to grow their US new business premium to £200m in 5 years. 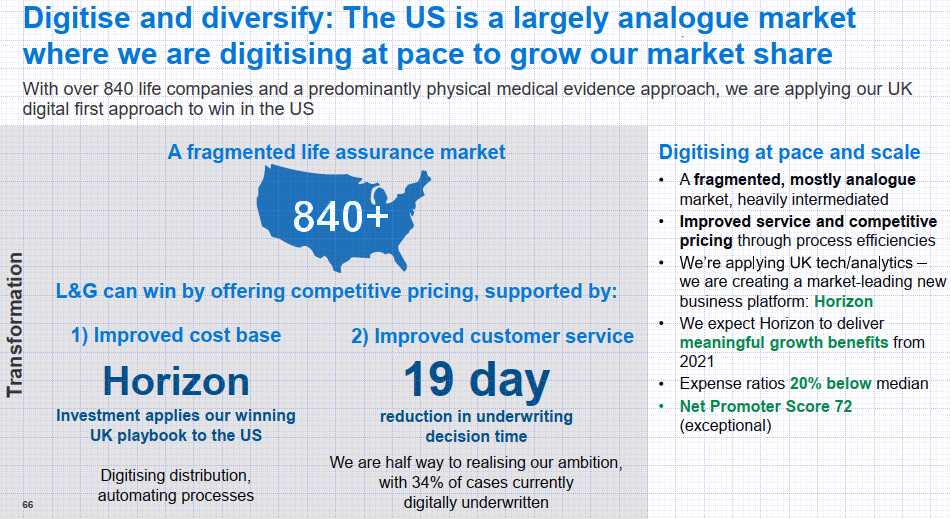 Why is L&G so successful?

Mastery of the basics

L&G established many of today’s protection essentials and its mastery is unrivalled. I can see no reason why others cannot replicate this. But you need to have the stomach for it, e.g. by targeting term pricing capability, with product development taking a supporting role in the IFA+ channel.

How would a challenger tackle L&G on its “home ground” of the essentials? Of the six, only distribution and (especially) pricing are areas in which L&G might choose to retaliate, causing you pain. On product at worst they would also develop and other areas are less visible.

Scale might satisfy a challenger but a reinsurer wants even more: volume. Only competitive term pricing in the IFA+ market currently delivers that.

To get competitive and sustainable term pricing you need (of course) decent reinsurance terms and an appropriate expense base. Repricing frequently to avoid being a sitting duck, you need to be able to identify and play in the gaps, not undercut L&G. It’s possible.

Given it’s possible to effectively respond, the essentials alone are not a moat.

This is the real reason L&G won’t be caught for years.

We have already seen that L&G doesn’t duck difficult decisions. They also challenge themselves; when I worked at L&G, the Head of Protection at times attended weekly meetings to explain how he was going to drive up volume. Working at L&G is not the route to an easy life!

L&G have undimmed and perhaps increasing ambition. This from 2020: 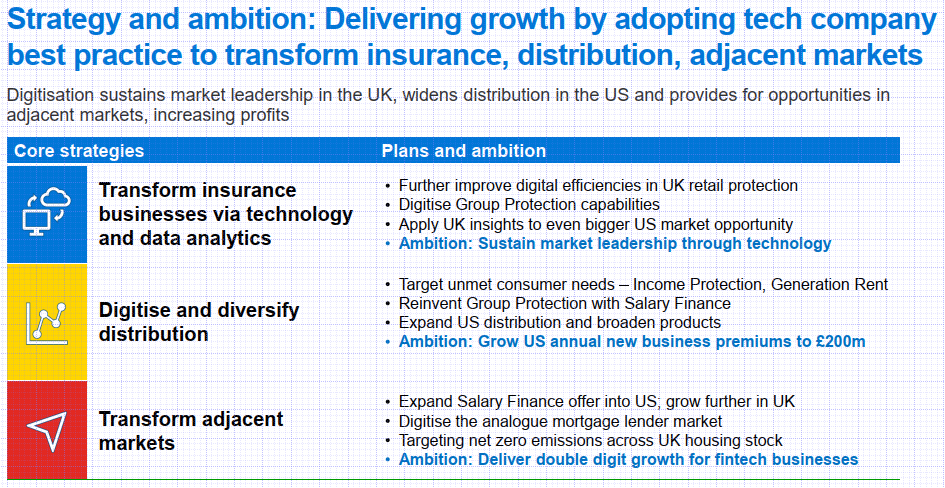 I have suggested three potential moats relating to the protection premiership. I don’t believe that the top 5 itself has a moat, as you can get there with an extreme ability and focus on the essentials. For similar reasons I believe the gaps between 4th and 5th can be closed.

There’s just one moat - the one established by L&G. It’s a combination of technical competence and, more to the point these days, relentless ambition.

How do you compare?