The Goldilocks Pricing report investigates market prices for guaranteed rate individual protection business, based on over 900 single life quotes from the aggregator and IFA channels.

For each of 1-3 we ask three questions:

The report (and this summary) uses the abbreviation BGL3 for the group of three companies Beagle Street, Budget Life and Virgin Money; the pricing for all three is carried out by Beagle Street. 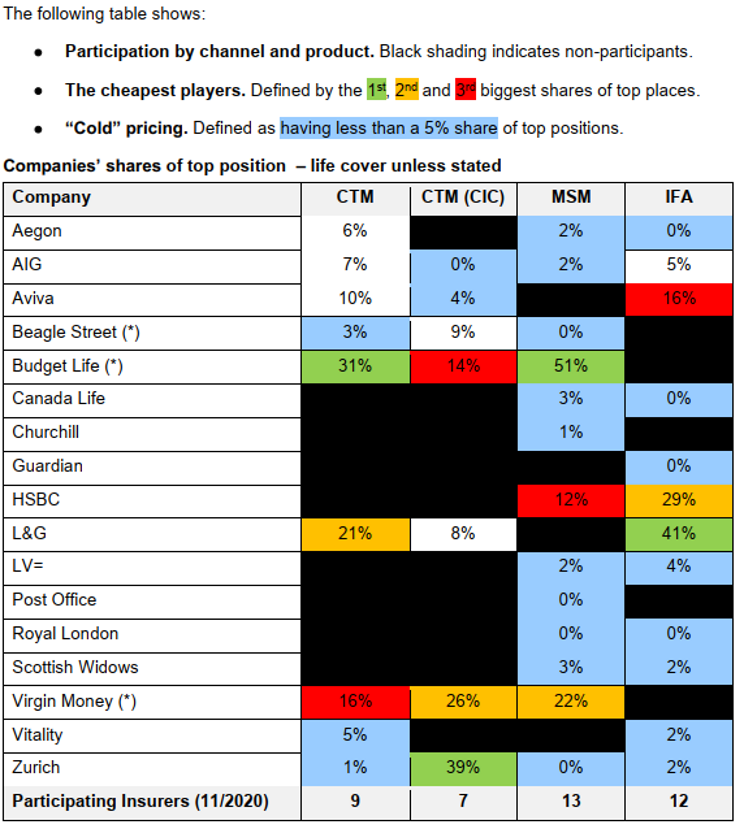 A few things surprised me here:

Better known are that:

The dominance of the BGL3 in the aggregator channels is summarised by the following table. In its chosen channels the total BGL3 share of top places matches (CTM) or exceeds (MSM) the top places of all its competitors combined.

For comparison, the proportion of top places taken by the cheapest non-BGL3 company is shown. In the IFA life market L&G has a share of top positions of just over 40%. It does not participate on MSM. On CTM it quotes in less than 50% of cases.

While we have already suggested that some companies are struggling to compete on price, having a share of top positions of 50%+ might suggest some danger of over-heating – pricing being “too hot”.

This report examines the concept further by looking at the ratio of 1st to 2nd position. Where top position is taken by one of the BGL3, the comparison is to the cheapest non-BGL3 provider.

Non-BGL3 taking top place undercut second place by 3%-4% on average. This applies for the IFA market and for (the investigated parts of) both life and CIC on aggregator portals.

The average BGL3 undercutting is double this in the CIC market and 3-4 times for life cover. Where Virgin is cheapest it undercuts by 20% rather than the non-BGL3 average of 3%-4%.