Thales's theorem is that the angle made between points A and B on the ends of a circle diameter and a third point P on the circle circumference is 90°.

In the diagram below you can move point P on the circumference.

We first draw a line from O to P. 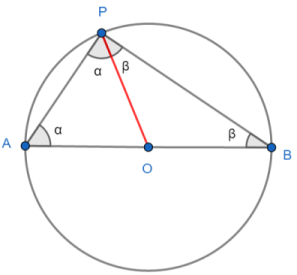 Similarly ΔOBP is isosceles. Set its identical angles to β.

What if the chord AB is not a diameter? It turns out that ∠APB is still constant.

Many proofs are flawed: they consider only the simplest case. For more on this see the inscribed angle theorem.