The angle between a circle’s radius and the tangent at its end is 90°.

This is my least favourite circle theorem. While the result seems clear discussions suggest people find it hard to prove or disagree over what is an acceptable proof.

This and the risk of diagram dependency this is largely what put me off geometry years ago. Let’s take a careful look. 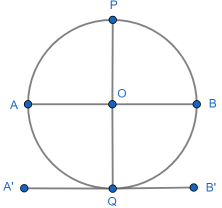 Does the proof need to be constructive? I think not: for me the line A’B’ with the required characteristics clearly exists. But an awkward person might want more!

I like the minimalist reflection proof mentioned later even more.

In the diagram below the chord bisection theorem says that if the radius OQ bisects the chord AB then ∠OCA = ∠OCB = 90°. 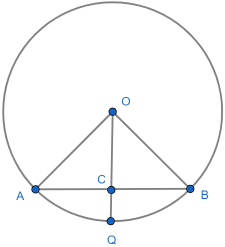 Draw a line parallel to AB through Q. We can do this in several ways, just using ruler and straight edge. A neat way uses similar triangles. Extend OA to A’ and OB to B’ to meet this parallel line: 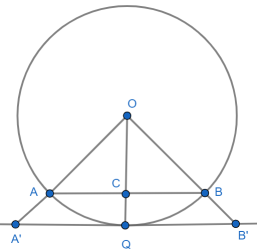 Since A’B’ is parallel to AB the common distance between the two lines is |CQ|. All the points on the arc AQB, other than the point Q, are closer to AB than |CQ|. So A’B’ intersects the circle at precisely one point, Q, and so is (by definition) a tangent at Q.

Is the result obvious?

Are there other reasons we might think the result obvious? Look again at the diagram:

A direct extension of the chord bisection theorem suggests ∠OQB’ is clearly 90° though a picky person might say the chord has disappeared at that point.

The last one is my personal favourite: it uses the circle, radius and tangent symmetry and captures the "obvious" nature of the result. Is it sufficiently rigorous?

Next is the alternate segment theorem.

Also check out these outstanding construction worksheets. These construction techniques seem to have faded from maths education.