Thales’s theorem is that the angle made between points A and B on the ends of a circle diameter and a third point P on the circle circumference is 90°.

If we move beyond Thales, so that the points A and B are on the circumference but do not form a diameter, the corresponding theorems become more interesting - and more challenging to prove.

The inscribed angle theorem can be stated in several ways. My preference is that “the angle on the circumference of the major arc is half that at the centre”.

In the diagram below you can move all the points except O, the centre of the circle. This helps us makes sense of what the theorem is saying and also points to two other related results.

First try moving around the point P. Without moving A, O or B, move P between A and B: ∠APB stays at 45°.

Now move around the point A between P and Q. The angles change, but we still have:

Finally move around the point Q between A and B. We have:

If P lies between A and B on the major arc and similarly for Q in the minor arc, we have three results:

We will now prove 1, while leaving 2 and 3 until our cyclic quadrilaterals article.

We break the result into three parts.

In the first part we have a diagram where the centre of the circle, O, lies within ΔAPB. In this case we draw the (red) line OP. AO and OP are radii, so are the same length.

This means ΔAOP is isosceles, so we can call the two equal angles α, as shown. Similarly in ΔBOP we have equal angles β. 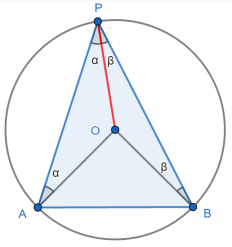 From this follows two things:

The proof often stops there - for example see this flawed proof from BBC bitesize.

Great. Job done, right? Not quite. One important point with geometry problems like this ... is that we have to make sure that our arguments work whatever the diagram.

The proof is incomplete, falling victim to diagram dependency - in this case choosing a “convenient” diagram in the set up. As soon as we move P far enough left (or right) the partial pretty proof falls apart. This is also confirmed by this wikipedia article.

In the second part we move P further to the left, so that BOP is a straight line. The previous argument will not work. 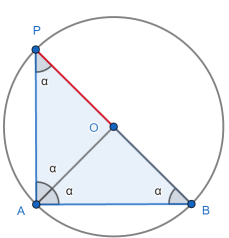 In the third part we move P further still to the left (9)or to the right) so that the centre O lies outside of ΔAPB. 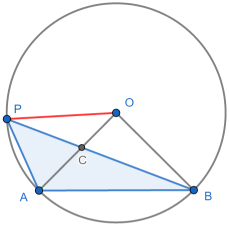 Again we want to show that ∠APB = ∠AOB / 2 = α, say. We again draw the red radius. As OP and OB are both radii, ΔBOP is isosceles, so we can fill in the angles β.

We now have a so-called “angle chase”:

For the minor arc and opposite angles results see cyclic quadrilaterals.