A cyclic quadrilateral is one whose four vertices can be placed on the circumference of a circle. Not all quadrilaterals are cyclic.

From the inscribed angle theorem the angle a chord makes with a point on its major arc is constant. Putting this together with (1) leads immediately to (2).

We’ve seen this diagram before - for the inscribed angle theorem, where the point Q is not usually drawn. But here it allows us to draw a cyclic quadrilateral.

In the diagram below you can move around any point except O.

Before we do this, let’s think about the set up, to ensure we don’t fall into a diagram dependency trap.

Four points on a circle might appear to be awkwardly placed: perhaps all fall one side of a diameter. But in any situation we can draw a line between the first and third points, A and B, rotating the diagram so that the AB chord is horizontal.

We now have P on the major arc and Q on the minor arc. We do not know the length of AB, the exact positioning of P or Q or the angles ∠APB or ∠AQB.

But just have a play. Move A and B around until you’re happy. Then keep A and B fixed and move P and/or Q. Note that: 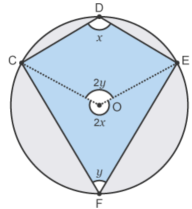 The proof at BBC bitesize - essentially summarized to the left - seems misleading. It assumes the constant angle on a minor arc result, but they have proved only the major arc result.

The problem is that the x and 2x parts have not been justified, nor is it obvious why we can assume that O is inside ΔCEF.

Our proof is quite different.

This is my own proof, though it would be a surprise if it existed nowhere else.

This means that we are allowed to choose P conveniently. This is a rather neat reversal of my normal diagram dependency proof critique.

We choose P so that O lies within the ΔAPB. We draw additional radii OP and OQ. We then have four isosceles triangles. We set their equal angles α, β, γ, and δ as shown. 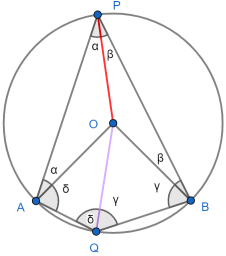 The angle on minor arc proof

After all that excitement it’s time for the technical tangent radius theorem.