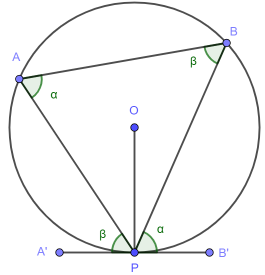 The chord PA divides the circle into a major segment and a minor segment. There is an angle in each and the alternate segment theorem says these are equal - in our diagram to β.

Similarly, the chord PB divides the circle into major minor segments and the highlighted angles are equal - to α, say.

The “most opposite” angles are equal.

Important notes to the diagram

The diagram is usually drawn as above but in general:

We can therefore pull A and B down, so that neither of the above hold and the angle equivalence will remain, although the values of α and β will of course change. 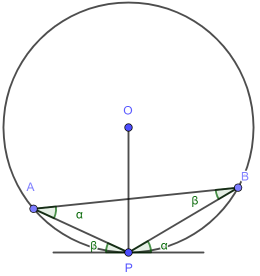 This is perhaps the least intuitive of the circle theorems. Have a play!

We join the points O and B with a line. 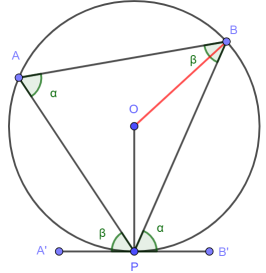 From the inscribed angle theorem we know that as we move A the ∠PAB remains constant and in fact equals ∠POB / 2. This holds even where A moves so that O is no longer inside ΔPAB.

The result for β is obtained in exactly the same way, joining O and A.

We wrap up with two technical results. First up is the chord bisection theorem.